Press release – How many Ritual Baths(Mikveh) does the Old City need? And why are there so many routes to Temple Mount?

On Thursday, February 9, Jerusalem heritage minister Ze’ev Elkin and mayor Nir Barakat will inaugurate the new “Ritual Baths Trail” which was prepared as part of the Davidson Center, at the foothills of Temple Mount/Haram al-Sharif. The Ritual Baths Trail is another one of many archaeological sites developed in recent years in the area of Silwan and the Western Wall Tunnels that became tourist attractions with a Jewish-religious orientation. The Israel Antiquities Authority and other national entities entrusted with protecting and presenting antiquities abuse their office time and again, presenting the city’s past in a way that is tendentious and unfaithful to the city’s cultural and religious diversity. Jerusalem antiquities have been “seized” by the wealthy and those close to the government and are hostage to a biased, dangerous agenda in the Old City and Temple Mount area.

In almost every archaeological excavation in the Old City and Silwan, when a waterhole is found and identified as a ritual bath (Mikveh), it undergoes conservation and is presented to the public. In recent years, ritual baths in the historic basin are presented as “conserving the thousands of years old Jewish heritage” and usually as part of a pilgrimage, in the context of purification ceremonies preceding the pilgrimage to the temple. It seems that that the inauguration of the Ritual Baths Trail is a new peak in the fond remembrance of ritual baths. The proportion of halakhic information presented in this project is particularly high. The trail ends at the Huldah Gate – the point from which the pilgrims would enter Temple Mount (according to the common assumption). Recently in Silwan, part of an ancient Roman Street was inaugurated and named Pilgrim’s Trail, also referring to pilgrims to the Temple. The ancient street runs beneath the main road of Silwan.

In ancient times, ritual baths were part of the Jewish way of life, among other groups who lived there: Edomites, Samaritans, and others. They were said to have been converted in many cases for other purposes: water reservoirs, sheds and more.

The thirst for renewing the pilgrimage to the Temple Mount seems to be at its peak. If not in words then in actions – the creation of controversial “archaeological” routes. The heightened participation of politicians in launching ceremonies is another sign of the very specific meaning and symbolism being forced onto the Old City’s antiquities. The fact that the Israel Antiquities Authority agrees to enable and even participate in these conservation projects only proves the inclination to glorify the Old City’s Jewish past in a way that is disproportionate to archaeological remains from other periods.

Beginning in 2011, conservation projects were undertaken of a number of pools that were unearthed in the eastern section of the Ophel excavations, outside the Old City. The quarries are dated to the Second Temple Period and are presented as ritual baths that were part of the religious worship of the time. The ritual baths are scattered among remains from other periods, mostly structures from the Byzantine and Early Islamic periods. The Ritual Baths Trail begins at the exit adjacent to the Old City walls, across the northern entrance to Silwan village, only meters away from the Givati Parking Lot excavations and the City of David site. It ends beneath the southern wall of Temple Mount/Haram al-Sharif and al-Aqsa mosque. There, the “Huldah Gates” and the staircase leading up to them were unearthed. The gates and staircase are dated to the Second Temple period, and are identified with the pilgrimage route of the worshippers from the days of the Temple. Our assumption is that the settlers are planning to create a link between this route and the “Kedem Center” and Elad’s “Pilgrimage Route”, which departs from the Pool of Siloam and passes through the ancient Rumi St., beneath Silwan’s main road.

Located to the south of the Temple Mount/Haram al-Sharif, this area abuts the Old City walls and the village of Silwan. This is the largest area of continuous excavation in the Old City. The excavations conducted here over the years have revealed the existence of a multi-layered site in continual use from the early Roman period (the Second Temple period) until today. Graves from the Abbasid period (8th to 9th century CE) were found at the site, as were the remains of large structures identified as palaces or administrative buildings from the Umayyad period (7th to 8th centuries), and residential structures and a monastery from the Byzantine period (4th to 7th centuries). Likewise remains were found that were identified as military structures that apparently served the Roman army after the city was conquered (2nd century BCE to 1st century CE). A small number of additional remains were found that were dated to the period of the Judean Kingdom in the Iron Age (7th to 8th centuries BCE). 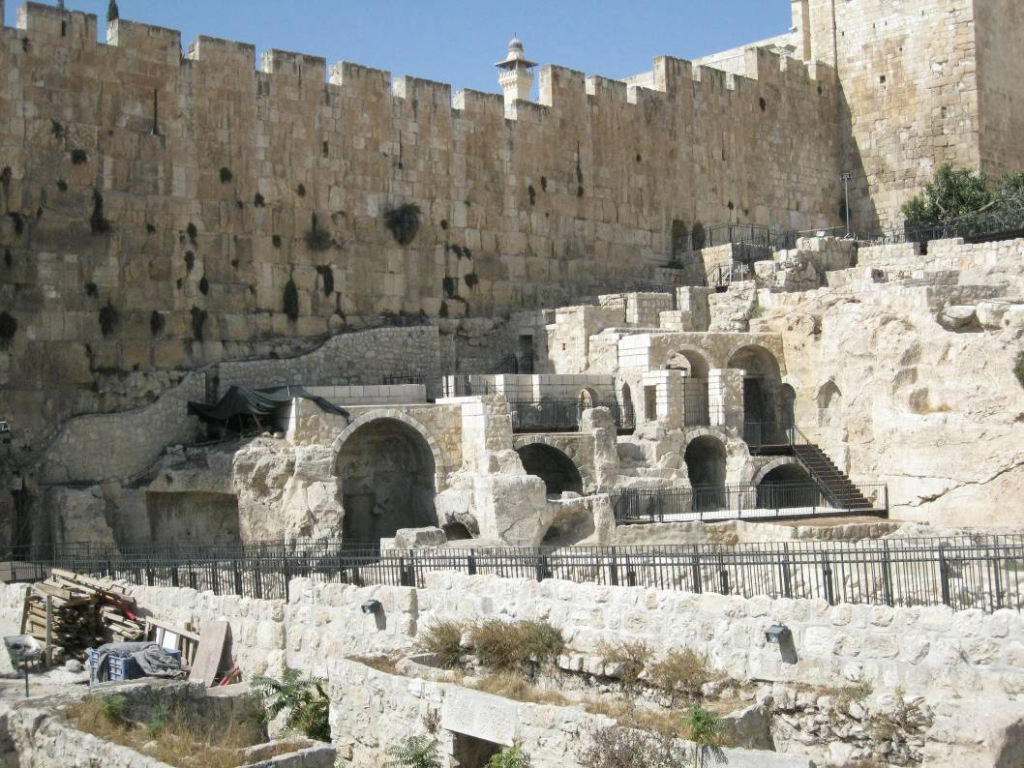 At the end of the 1990s the area was declared a national park. A few years later, at the beginning of the 2000s, the Davidson Center, which serves as an antiquities museum for the area of the Ophel, was built on the site. The center, administered at first by the East Jerusalem Development Company, was later transferred to the Company for the Reconstruction and Development of the Jewish Quarter of the Old City of Jerusalem. These days there is a struggle between Elad and the state, to transfer the administration to Elad.