Valley of Hinnom/Wadi Rababa is bordered by Mt. Zion on the north and on the west by the Jerusalem Cinematheque.  The Abu-Tur neighborhood lies to one side of the valley, and Silwan to the other (Number 3 in the Jerusalem’s Historical Basin cemeteries map).  The valley is part of what until 1967 was the demilitarized zone between Israel and Jordan.  Today it serves as a green space for picnics, rock climbing and horse-back riding for both the Jewish and Palestinian populations.[1]

The wadi is for the most part construction free, except for some stone terraces surrounding fruit trees and a road connecting the Al-Bustan neighborhood in Silwan to Abu Tur and west Jerusalem.  Archeologically, Valley of Hinnom is the continuation of an area called Katef Hinnom (Hinnom Shoulder)/Ras a-Dabus, which lies from St. Andrews Church in west Jerusalem to Al-Bustan in the east.  The entire area served for burials over thousands of years.  Its eastern, lower end is identified with Akeldama in the Christian tradition.

The area contains many tombs excavated into the rocks, where dozens of people were buried over different periods.   Burial styles and other findings allow us to date the earliest ones to the end of the Judean Kingdom (7-8th Century BCE), and show continuous burials up to the Byzantine period (4-7th Centuries CE).  Along the road that runs from Abu Tur to the valley one can see a number of graves from the Judean kingdom.  Additional graves from that period are found in privately-owned land belonging to residents of Abu-Tur.

In the course of digging in the Valley of Hinnom Shoulder/Ras a-Dabus, where the Begin Center is currently located, archaeologists unearthed a silver scroll dated to the 7th Century BCE with an inscription of a section from the Priestly Blessing, a prayer which was familiar in biblical times and is still recited in synagogues to this day.[2]   This is a rare and unique find that testifies to the continuity of prayer traditions over thousands of years.

The Onuphrius Convent, which belongs to the Greek Orthodox Church is situated on the valley’s incline.  The convent was built in keeping with the Christian tradition that identifies the valley with Akeldama – the field of blood.  Christian tradition has it that it was bought by Judas Iscariot with the money he received for delivering Jesus to the Romans.   A Crusader-era structure (12-13th Century CE) identified as a burial place for Christian pilgrims who died in the Holy Land abuts the convent’s north end.  Its function may account for the name: “the House of bones.”  The hall is preserved up to its ceiling, and is adjoined by a tower. 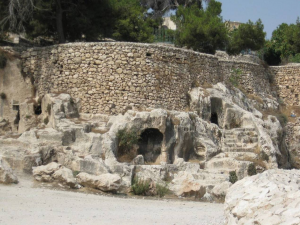 A set of excavated family tombs dated to the First Century CE are located near the convent.  These are luxury tombs composed of several rooms with carved burial niches.  These structures and the ossuaries (sand-stone chests) within them are evidence of a burial style practiced by Jerusalem area Jews at the time of the Second Temple.  Inscriptions found on some of the tombs and the ossuaries support this claim.  The tombs’ wealth and their presence on this slope testify to the centrality of Jerusalem and of the temple.  Pilgrims from throughout the ancient world made their way to Jerusalem, and the rich among them invested a great deal of money to purchase burial grounds and build opulent family graves.[3]  The graves served these families over several generations.  Inscriptions found on some of the graves include names that appear to belong to families originating outside Jerusalem, such as the cave of the Ariston family, which was based in Apamea, Syria.

It appears that Jerusalem residents continued to use the graves during the late Roman period (2nd-3rd Centuries CE) and in the Byzantine era (4-7th Centuries CE).  The later use of the structures was made by people who were not of the original families that purchased the burial sites.[4]  Alongside the old graves, which were in continuous use, new graves were excavated in the late Roman Period and the Byzantine era.  These graves are characterized by arcosoliums (arched recesses used for entombment) excavated in their internal walls.  Remnants of cremation burials (the burial of cremation ashes) were also found in the Hinnom Shoulder/Ras a-Dabus.  Cremation burial was customary in the western parts of the Roman Empire, and offers testimony that the interred came from those regions.  The assumption is that they were Roman soldiers or officials.[5]

A fenced cemetery near to the incline below the Mt. Zion Hotel is Jerusalem’s Karaite Cemetery.  Today the cemetery is no longer in use, but it served the Karaite community that came to Jerusalem in the Tenth Century and persisted until the 20th.  On the slopes of Mt. Zion, on the north bank of the Hinnom Valley, we find a cemetery called Sambuski.  This cemetery served poor Jews during the Ottoman period.[6]  Today the place is surrounded by a fence and out of use.  The area is under Israeli authorities’ control; plans for the graves’ repair and restoration have yet to be actualized.

Apart from the paved road across the Valley of Hinnom which connects Abu Tur and west Jerusalem to the Silwan village and the archeological site of “the City of David,” most of the area remains unbuilt.  Over the years 2003-2005, the Jerusalem Development Authority (JDA), employing the East Jerusalem Development Ltd. (EJD), ran a development project in the valley that included improving the Silwan-City of David road, landscaping, and paving a walkway across the valley.  Currently the JDA is at work on the construction of a promenade at the cost of three million NIS.[7]  The promenade’s route is from west Jerusalem at one end – the Cinematheque and the Hinnom Shoulder region to Al-Bustan in Silwan at the other end.

Over August-September 2011, the Conservation Department of Israel’s Antiquities Authority performed conservation work on the Crusader hall.  The building has been preserved up to its ceiling, but over the years its underpinnings have eroded, and preservation work was vital for its maintenance.  The development work and the Onuphrius Convent create a disconnected, bucolic, Middle Eastern landscape removed from the conflicted reality the valley is surrounded by.

Archaeology and the Residents

Much of the Valley of Hinnom is part of the Palestinian neighborhood of Abu Tur.  Several neighborhood homes are adjacent to graves, and other graves lie within the properties.  The development of tourism divides the settled area from that designated for tourism, and increases alienation.  The alienation of area residents is amplified because the graves are depicted as Israeli assets, and also because millions of shekel are invested in tourism development while the neighborhood itself – which is in desperate need of infrastructure – sees no investment whatsoever.  Furthermore, Abu-Tur is part of Silwan, and the walkway creates a barrier that separates it from the village’s other neighborhoods.  An example of the difficulty involved in marking off archeology from area residents is evident in the home property of the Siam family in Abu Tur.  The area is fenced in by a stone fence leading to a rocky slope with tomb excavations.  The burial style suggests they should be dated to the 7-8th Centuries BCE.  The Siam family home is one of several homes on the slope of Valley of Hinnom/Wadi Rababa.

While the Israeli authorities develop the area, conflicts are taking place between the Palestinian residents and settlers.  In the past, the Elad organization built a 120m long roped walkway over the valley.  The walkway was advertised as an adventure-sport tourist activity.  The project ran for a number of months during 2008.  In the past year, conflicts between settlers and Wadi Rababa residents included damage to olive trees, complaints filed with the police and arrests.[8]  Silwan residents feel that Israel is overtaking the open space and the entire area in a way that distances them from it and prevents them from using it for their needs.

Valley of Hinnom/Wadi Rababa is a uniquely picturesque, archeologically-compelling area in the center of a political conflict.  The landscape development, conservation work and improvement of public access to the antiquities are important and valuable.  Along with the Israeli authorities’ development work, account should be taken of the socio-economic status and situation of area residents and of the political situation.

The battle conducted over the land between settlers and Palestinians, and the tourism development by Israeli authorities, which includes no coordination with the local residents, create a feeling that the activity’s purpose is strengthening Israel’s stronghold on the valley.  The valley connects the City of David site in Silwan village with west Jerusalem.  The only thing dividing the two is the Al-Bustan neighborhood; tourism development work planned for Al-Bustan involves the demolitions of dozens of homes.

It appears that the landscape development and the investment in conservation is accompanied by political interests connected to the contest over sovereignty in East Jerusalem.  Consequently, there is a danger that the focus on the antiquities will be seen as a threat to the residents and as an Israeli interest.  It would therefore be best to display the valley’s multi-cultural heritage via graves testifying to various groups and peoples who lived in the city of Jerusalem, shaped it, and were buried here.  The beliefs and traditions associated with the area make for a valley whose religious and cultural value cuts across national and religious sectors.