A tourist site dedicated to the ascendance of Jewish people to Jerusalem throughout the generations appeared recently in the media. The first tourist site of its kind, it is called “The Journey to Jerusalem”. It is located in the Old City, below the houses of the Muslim Quarter, within a compound built in the Mamluk period (14th century), which includes a Khan and a Hammam (public bath). The project, which was initiated by the “Western Wall Heritage Foundation”, began as an archaeological excavation, continued in the form of conservation projects, which the Israel Antiquities Authority has been carrying out for ten years. The presentation of the story out of context is another example of how the Israeli authorities erase the multicultural heritage of Jerusalem.

The tourism project was initiated following the Israel Antiquities Authority’s approval to perform an archaeological excavation at the site, presented as part of the study of Jerusalem’s history. It began in 2004 beneath the “Ohel Yitzhak” synagogue and later underneath the homes of Palestinian residents. Based on the documentation that we have been able to access, it seems that the plan to establish a touristic enterprise  on the theme of the relationship between the Jewish nation to its land at the Mamluk compound has been known to the authorities since 2007. Thus the absurd situation arose whereby the Israel Antiquities Authority continued the excavation and conservation of the Mamluk compound, which they claimed were a necessity from an archaeological perspective, all the while knowing that a tourist center with Jewish content completely unrelated to the physical and cultural context of the structures would be established there. In this way, the Antiquities Authority granted its approval to erase the site’s historical story and prepared a large, impressive space to be used by the “Western Wall Heritage Foundation”.

Since archaeological activity is an academic activity by law, the excavations are organized through the “Antiquities Law” and building plans in antiquities sites do not require the approval of building and planning committees. In this way it is possible to excavate underground spaces under the protection of the law, and then present them as a new initiative – all without public discussion. This is an example of how various bodies (such as the Western Wall Heritage Foundation, Elad and others) exploit the Antiquities Law in order to establish religious or tourist compounds under the protection of the Prime Minister’s office.

For further reading on the conduct of the Antiquities Authority and the Western Wall Heritage Foundation: “Antiquities in the Basement” (chapter 4).

The “Journey to Jerusalem” initiative

The initiative, in an all-inclusive, tendentious and poor manner, describes Jewish history from 70 CE to the present. The information focuses on the Jewish people throughout different periods in history, in an exaggerated or distorted manner. The Jewish people are represented at times as playing a central role in the municipal politics of the ancient world during each and every period, on the one hand, and as being constantly persecuted, on the other. The description is told from a religious-ultraorthodox perspective and focuses on the undisputed belief in God and the longing of the Jewish people to build the Temple. In conclusion, this is a matter of very little credible historical information and very much a matter of propaganda.

Importance of the Site

The Hammam, known as Daraj al-Ain and the Khan next to it are known from literature and research as part of the public compound that was used by residents and visitors during the Mamluk period. Apparently this compound is part of the building enterprise by the ruler Sayf al-Din Tankiz (1312-1340). The ruler Tankiz is known for having built the nearby “cotton market”, which contains additional Khans and Turkish bathhouses. Daraj al-Ain was built next to Hammam al-Ain. In the Ottoman period the Hammam shut down and houses were built above it.

The present initiative reinforces the need for the conclusions from the Steering Committee formed by Emek Shaveh, which were consolidated in the following document Guiding Principles for a Jerusalem Antiquities Master Plan.

The case of “Journey to Jerusalem” is one example of the major problems of the past decade with Israeli archaeology in Jerusalem. “Jewish archaeology” that has turned into a platform for building privatized tourist initiatives managed by right wing and religious entities that harm our collective cultural assets. 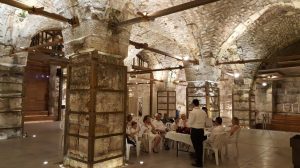