On February 13, 2012, the Jerusalem Building and Planning District Committee held a discussion on the issue of the construction of a four-story structure on the area known as the Givati Parking Lot in the village of Silwan. Also at the beginning of February, media reports were released about the submission of the building plan for “Beit Haliba”—a three-story building on the Western Wall plaza. On the surface, there is no direct connection between the two building projects (the construction in the Givati Parking Lot is being promoted by Elad, the private settler organization focused on promoting Jewish settlement in East Jerusalem; while “Beit Haliba” is an initiative of the Western Wall Heritage Fund, a governmental organization under the jurisdiction of the Prime Minister’s office). However, if one looks more closely at the two plans, one can discern a similar modus operandi for the procurement and preparation of the areas for construction. It is apparently not by chance that the two plans are being presented to the committee at virtually the same time. 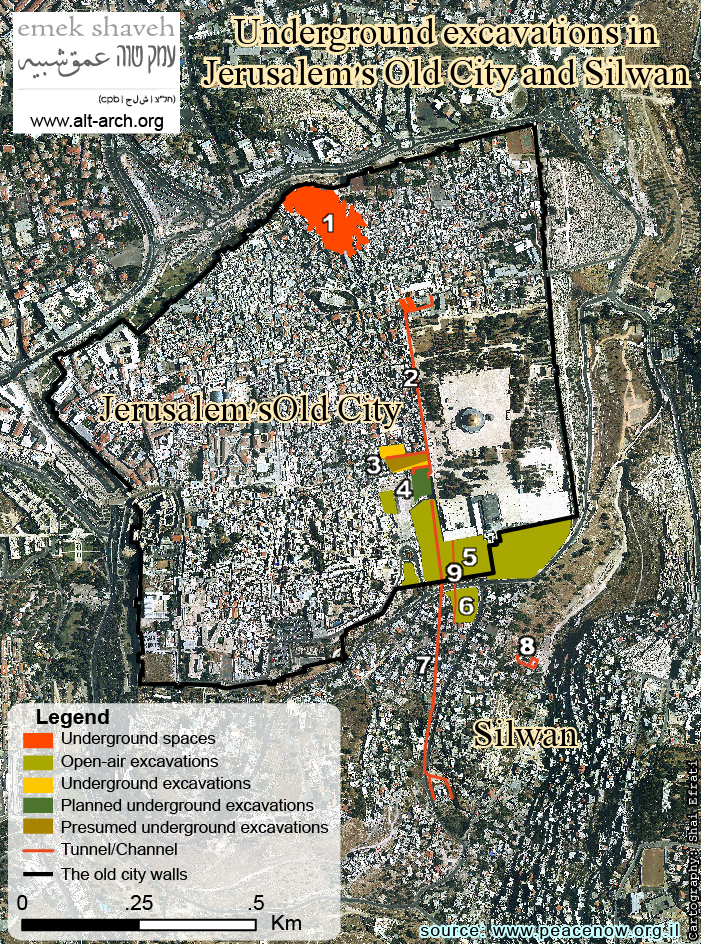 The Givati Parking Lot (number 6 on the map)

The Givati Parking Lot is an open area at the north end of the Wadi al-Hilweh neighborhood of Silwan, across the street from the entrance to the Visitors Center of the City of David archeological park and at a distance of twenty meters from the walls of the Old City. Salvage excavations, funded by Elad and conducted under the auspices of the IAA, have taken place on the site since 2003, at first under the direction of Roni Reich and Eli Shukrun, and since 2007 under the direction of Doron Ben-Ami. The goal of the salvage excavation is to prepare and authorize the area for development and construction for the benefit of the City of David archeological park. In the past, the lot was part of the open areas used by the residents of Silwan.

Over the years of the excavation, the media have reported about extraordinary findings in the excavations, from the greatest cache of gold coins from the Byzantine era1, to a Second-Temple-period structure, which some suggested was the palace of Queen Helena.2 These reports and others created public interest in the archeological excavation and its findings. For many, the findings and the academic publications around them were proof that this was an archeological excavation free of political interests. Thus, the IAA’s statements that its activities are not political, but purely scientific, have fallen on sympathetic ears. 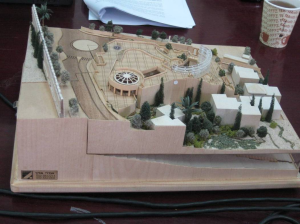 After five years of excavations, in which depths of ten meters and more were reached, an area of approximately four dunam was sanctioned for construction, on which the Elad organization plans to build a four-story building covering 9,000 square meters. The plan of the building includes a visitors center, museum, coffee shop, and more. The archeological excavation prepared the area on three levels: (1) the deep excavation prepared the infrastructure and foundations for the future structure, so that once permits are attained from the planning and construction committees, construction will be able to begin immediately; (2) The public viewed the excavation as a scientific archeological excavation, and overlooked the fact that the dig was being used in order to advance the political goals of Elad and of certain government bodies. Thus, although the excavation in fact contributed to the creation of the infrastructure of Jewish settlement in Arab East Jerusalem, the Israeli governmental authorities and settlers were able to present their work as an exclusively scientific archeological excavation; and (3) The archeological findings themselves not only deflected potential opposition, but even aroused public sympathy and support for the excavation among the Israeli public.

The proposed building for the Givati Parking Lot overshadows the village of Silwan. Along with the City of David Visitors Center, it will create a single tourist zone under settler and Israeli governmental control. The placement of the building at the northern entrance to Silwan will cut off the Palestinian residents’ direct connection to the Old City and to the Palestinian neighborhoods to the north and east of the village. As can be seen in the model of the plan, the presentation of the Palestinian homes as small boxes outside of the limits of the compound is an indication of the disregard for the residents, who will live in the shadow of the tourist center on the Givati Parking Lot site.

Beit Haliba (Number 4 on the map)

At an AIPAC conference in September 2011, Benjamin Netanyahu spoke about a clay seal that has been found in the excavations of the Western Wall plaza. On the seal appears the inscription “Netanyahu Ben-Yoash.” The seal was discovered during the excavations of a structure that is dated to the 7th century B.C.E., in the western section of the Western Wall plaza. Netanyahu mentioned the seal as an example of the Jewish people’s three-thousand-year-old connection to Jerusalem.4

Netanyahu’s speech is emblematic of the Israeli conception by which remains from thousands of years ago justify the Jewish people’s exclusive right to the land of Israel. For many in Jewish-Israeli society, the fact that various remains from other periods were exposed in the same excavation, some of them more important than that seal (such as a Muslim neighborhood or Byzantine structures), does not grant those who descend from those other cultures any right to the same place. The connection between Jewish remains from the past and present-day sovereignty is seen by many Israelis and much of Diaspora Jewry as an inalienable and legitimate right.

In early February 2012, a plan for construction on the western section of the Western Wall plaza was deposited for public review by the Jerusalem Building and Planning District Committee. The plan was put forth by the Western Wall Heritage Fund, an Israeli government body responsible for the Western Wall plaza and the Western Wall tunnels. The structure, known as “Beit Haliba,” is planned to cover approximately 3,700 square meters and to rise three stories above ground level and one and a half stories below ground level. The planned building will face the Temple Mount/Haram al-Sharif.

In 2005, the IAA began excavating on the western section of the Western Wall plaza. The excavation was conducted almost non-stop between 2005 and 2009, on an area of approximately 1.5 dunam.5

The excavation of the Western Wall plaza exposed remains of the Mugrabi neighborhood, which was destroyed by the State of Israel in 1967, as well as ancient remains from the Mamluk (13th–16th centuries C.E.), Byzantine (4th–7th centuries C.E.), and Roman (2nd–4th centuries C.E.) periods, and all the way back to a structure from the 7th century B.C.E. The high point of the findings was a Roman road from the days of Aelia Capitolina (the name of the Roman colony built in Jerusalem by Hadrian), which dates to the 2nd century C.E. This is a road that ran through ancient Jerusalem from north to south, and which follows the same contours as today’s Al-Wad/Ha-Gai Street leading through the Old City from the Western Wall plaza to Damascus Gate. What is unique about this finding is that it exposes a section of dozens of meters of the road and shows us that this was the central street of Jerusalem in the 2nd–4th centuries C.E., around which the Roman city was built up. A group of archeologists protested the construction plans for Beit Haliba on the claim that the construction would harm the archeological remains.6

And yet, the excavations on the Western Wall plaza received less public criticism than the excavations in Silwan or in the Muslim Quarter of the Old City, since the Western Wall plaza is perceived by most Israelis as undisputed Israeli territory. The fact that the area was authorized for the construction of a building that will change the skyline of the heart of the Old City was not taken into account during the archeological excavations.

Archeology as a Tool for Changing Topography and Landscape

There is no disputing the fact that archeological excavations change the lay of the land. Large amounts of soil are excavated and removed, remains of structures are exposed, and the perception of the place changes according to the way in which the exposed remains are presented. The excavation creates a new reality on the ground, but it can also constitute infrastructure works that enable the building of structures that change the skyline of the area. Beit Haliba, planned as a three-story building, and the building on the Givati Parking Lot, with its projected four stories, are both planned as complexes in the area surrounding the Temple Mount/Haram al-Sharif. Both of these compounds will have an effect on the local landscape. With the completion of the construction of the compounds, the new skyline will minimize the prominence of the Dome of the Rock and the Al-Aqsa mosques for the observer from a distance, obstructing them with symbols of Jewish-Israeli sovereignty over Jerusalem. To be accurate about these excavations, however, one must emphasize that the bulk of the findings in both compounds are from the Roman and Byzantine eras (2nd–7th centuries C.E.) and Muslim periods. While the findings themselves can teach us about the variety of cultures that shaped the city throughout history, the act of containing them within a closed compound allows the owners of the buildings to appropriate the findings and limit their exposure to the general public. The planned structure for the area of the Givati Parking Lot will enable the convenient passage of visitors from the Ophel excavations (number 5 on the map) and the Old City to the area of the City of David archeological site. Making Silwan accessible to tourists and emphasizing it as a Jewish and Israeli archeological and touristic site is a motive of the Israeli authorities and Jewish settlers in the village, which minimize the importance of the Palestinian presence there.

Archeological excavations in a conflicted area are an integral part of the actions that influence the political status quo in the area. In this sense, an archeological dig is no different from paving a road, or digging a foundation for a new building. The professional-scientific image of and public interest in archeology serves to blur the political influence that archeology has in the political conflict in East Jerusalem. In the political reality of the Old City of Jerusalem and the village of Silwan, it seems that the best solution is to halt all archeological activity until a political solution is reached for the area. The archeological excavations that have already been done should be made part of the public space. From the remains exposed in the Davidson Center in the Old City, through the walls of the Old City, to the remains in the “City of David” site, and those that were uncovered on the Western Wall plaza and in the Givati Parking Lot—all these must be open for the public at large and not enclosed within a structure under private or even public ownership. A good example for a way to display archeological remains to the public can be found in the Davidson Center and in the Ophel excavations. The remains of the past must be presented in an open garden, with remains from several periods exposed alongside one another and as an integral part of their present-day context. The Givati Parking Lot is part of the village of Silwan and as such it must be presented to the public. Likewise, the excavations on the Western Wall plaza must be part of a public area that is open for residents, and not part of a closed building that stands impermeably facing the Dome of the Rock and al-Aqsa. It seems that both of the proposed buildings will heighten alienation and estrangement between residents, visitors, and the archeological remains. In the political reality surrounding the Temple Mount/Haram al-Sharif, the establishment of such places has political and social ramifications that must be taken into account. It must be understood that the goal of strengthening the Israeli hold around the Temple Mount/Haram al-Sharif is to change the status quo and bolster Israeli claims to sovereignty over the Old City, the village of Silwan, and their environs.